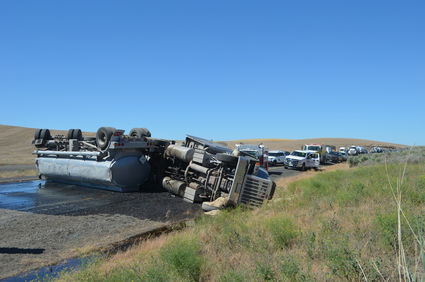 Both the driver of this semi tanker hauling hydraulic oil and his passenger were able to climb out of the truck uninjured after it overturned at Milepost 75 of U.S. Highway 395 on Thursday, June 17.

LIND - A tanker semi carrying hydraulic oil overturned on U.S. Highway 395 at Milepost 75 shortly before 1:30 p.m. Thursday, June 17, spilling oil into the median and onto the southbound lanes. Both lanes were blocked until shortly after 4 p.m.

The driver was headed northbound on Highway 395 when he allegedly looked up at something on the hillside, crossed the median, and overturned on the southbound lanes.

Both the driver and passenger were able to climb out of the vehicle uninjured.