By Lloyd Stoess
Special to the Journal 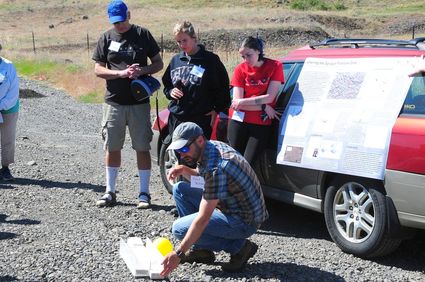 Members of the Palouse Chapter of the Ice Age Floods Institute were joined by visitors from across the state and Oregon and Idaho for a tour of the Cheney-Palouse Scabland Tract May 15. Pictured, from left, are chapter president Lloyd Stoess; Morea Shofield, who presented on Deciphering the Sprague Fracture Zone; and co-leader of the tour, EWU Geology student Chelsi Howard. Chad Pritchard, EWU Geology Department Chair, is seen in front, demonstrating fracture zones for the crowd. Pritchard was also a co-leader of the tour.

The Palouse Falls Chapter of the Ice Age Floods Institute led a car caravan tour of the middle/western part of the Cheney-Palouse Scabland Tract on Saturday May 15th.

Led from Ritzville City Park, the group headed east on historic Highway 10 to Sprague. Between Sprague and Lamont, Schofield gave a presentation on her studies of th...