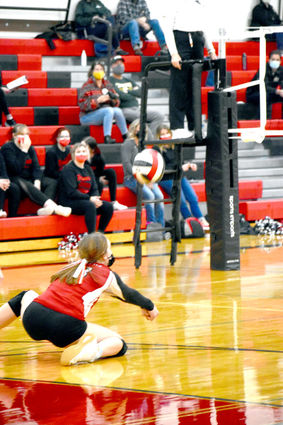 RITZVILLE – The Broncos had their first home volleyball match of the shortened season, beating Northwest Christian (Colbert) 3-1 on Feb. 27.

"It's great to be back on the court. Lind-Ritzville-Sprague is some awesome competition," Northwest Christian Coach Lindsey Friedly said after Saturday's match.

"They played less than average, trying to get in synch," Lind-Ritzville-Sprague Head Coach Cari Galbreath said. "They need more consistency."

"It was great for our first night out," said second-year Colfax coach Brandy Brown.

SPANGLE — The Lind-Ritzville/Sprague Broncos girls volleyball team improved to 2-1 on the season Feb. 25 following a win over the Upper Columbia Academy Lions.

The first set was a back-and-forth battle, with the Broncos taking the set 25-23. But the warmed up Lions stormed back in the second set to win, 25-13, and tie the game at 1 set each.

Lind-Ritzville/Sprague was led by Taylor Galbreath, who had 15 digs, 10 kills and 4 aces. Amelia Court added 16 assists and Court, Dakota Killian and Grace Fedie all had 1 block.

For the Lions, Lauren Moody set the tone with 14 kills and 11 digs. Teammate Linden Peterson also had 11 digs

The Lions’ Madison Threadgill had 19 assists, Cassie Fleck had 9 blocks and Sidney Folkenberg had 4 aces.

Upper Columbia dropped to 1-1 on the season.