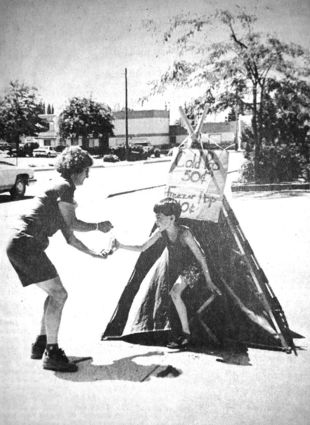 A photo from 25 years ago - July 27, 1995 - NOLAN MAJORS has a soda pop and freezer pop "tent" set up in the Washington Association of Wheat Growers parking lot. Purchasing a soda is local United Parcel Service driver Kay Updegrave. This is Majors' second year in his business venture.

A party consisting of Henry L. Schaefer, John Oestreich, Jake Bastron and Jake Dewald were over at Soap Lake the first of the week. Mr. Bastron found a man there who weighed more than he did. Mr. Bastron tips the beam at 265, but this man, who was from Wallace, touched 340 pounds. The two men got in the water and credible witnesses claim they surely raised the level of the lake. Mr. Bastron is a fine swimmer and takes great delight in water sports. He will remain there a few days and then go on to visit at Dryden.

Lack of Wire is Blamed for Water Shortage

With the return of hot weather,

Ritzville's "off again on again" water shortage was on again this week. The badly-needed starting switch for the new pump on the city's largest well arrived Monday morning, but contractors discovered

that no wire had been ordered

to connect the pump, switch and power line.

Adams County Farmers began the "downhill" operations this week on harvesting what one warehouse manager called "one of our better harvests." While an exact average yield will have to await the total crop and the total acres arithmetic, yield reports from the Journal-Times' weekly "around the county survey of warehouses" indicated yields were common from 35 to 40 bushels on dryland wheat. In the Ritzville area, Manager Don Danekas of Ritzville Warehouse Company indicated that with good weather, the crop would be about 85 percent harvested by the end of this week.

While some area farmers are entering their second week in the harvest fields, many others have just begun. "Yields, by large, are better than projected before entering the fields," said Union Elevator spokesman Randy Roth. Roth said all of the Union Elevator

stations were receiving grain in the form of white and hard red wheat with yields ranging from 20 to 80 bushels. The cutting of spring wheat had not started yet throughout the region.