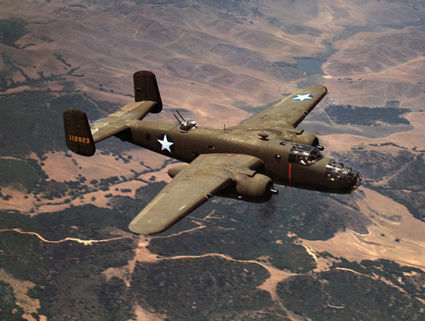 The B-25 Mitchell bomber, made famous in the Doolittle Raid, will lead a formation of four other World War II fighter planes in a July 4 flyover of Eastern Washington.

SPOKANE VALLEY – A small piece of history will pass through eastern and central Washington skies on July 4.

Five World War II vintage aircraft owned by Hangar 180 air museum in Lewiston will be conducting a flyover over of the region beginning at 8 a.m. The flight takes them over southeast Washington, through the Tri-Cities area to Yakima, up to Ellensburg, back over central and eastern Washington to Lewiston and then up to Spokane where they will layover for an hour at Felts Field.

After refueling, the flight resumes east over Spokane Valley to Coeur d'Alene, Idaho and back home. Accordi...