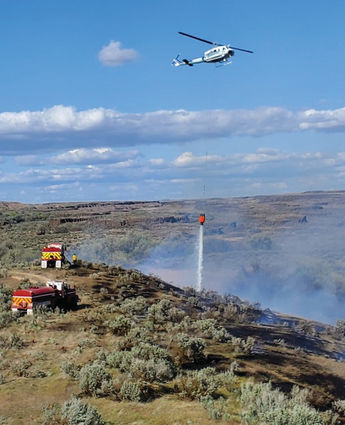 A state Department of Natural Resources helicopter drops water on a wildfire in Adams County as water tenders station nearby.

OTHELLO - A fire that grew to an estimated 150-200 acres after igniting on private property was initially contained around 7 p.m. Thursday, April 23.

Adams County Fire District No. 5 Chief Gary Lebacken said the call for the fire came in at 1:19 p.m., and about a dozen District No. 5 volunteers and paid staff turned out.

"We had some mutual aid from Grant County Districts No. 10 and 11, the Bureau of Land Management, Department of Natural Resources and U.S. Fish and Wildlife," Lebacken said.

The Department of Natural Resources provided one helicopter.