Shed fire breaks out on E. Alder Avenue in Ritzville 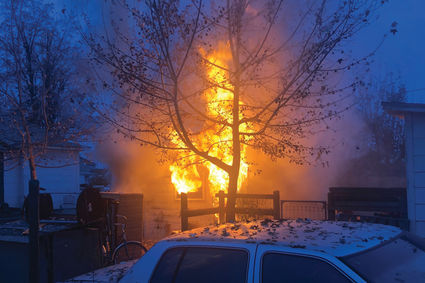 A shed with a woman living inside of it caught on fire in a Ritzville neighborhood in the early evening of Nov. 14. The shed was a total loss.

A shed with a woman living inside of it caught on fire in the early evening in a Ritzville neighborhood on Nov. 14, and was quickly put out by emergency responders. 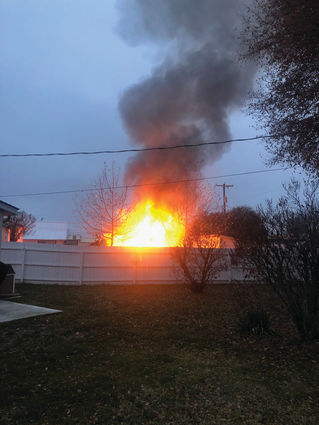 A shed catches on fire on E. Alder Avenue in Ritzville on Nov. 14. The fire broke out while a woman was living inside of it. The woman escaped the blaze unharmed.

According to Ritzville Police Chief Dave McCormick, the shed, located behind a house on E. Alder Avenue, caught fire after 4 p.m. with the woman still inside of it. The woman escaped without harm and the fire had been put out by the time The Journal arrived on scene around 4:30 p.m.

McCormick said he was told by a firefighter that they believed the cause of the fire was most likely a result of extension cords from the house that supplied power to the shed. One of the extension cords had a power strip at the end with an electric heater plugged in, and the power strip appeared to have been melted.

The woman told emergency responders that the mattress lying on the floor of the shed was on fire. The woman used a garden hose and the homeowner used a fire extinguisher to try and fight the blaze, but to no avail.

A man who stayed in the shed from time to time told McCormick that most of the belongings owned by him and the woman had been packed up and stored in a nearby garage, as they were planning on moving soon.