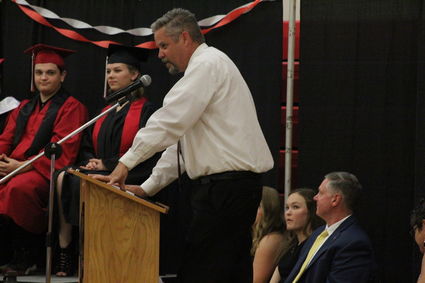 Kevin Terris during the 2019 Lind-Ritzville High School graduation ceremony. Terris is in his second year as principal at LRHS, after being a teacher, assistant principal and athletic director in the Tonasket School District.

Kevin Terris has just started his second year as principal of Lind-Ritzville High School, but he has been in education for longer than that. Much longer.

"This is my 24th year in public education," Terris said.

Terris started his career as a social studies and language arts teacher at the high school level. After about a decade of that, he became an athletic director and assistant principal. Then, 14 years later, he was hired by LRHS to be its new principal.

A long career in education is not what Terris had planned in high school though.