Ritzville farmers unite for one of their own 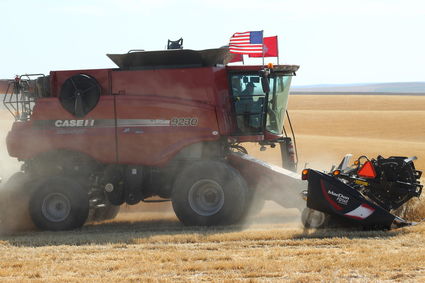 A combine harvests Larry Yockey's wheat field during the harvest bee on July 28. In all, about 60 volunteers and 17 combines embarked upon 1,200 acres of the Yockeys' farm, finishing in six hours. Yockey, who was diagnosed with stage IV melanoma earlier this year, said it usually takes him 12-14 days to finish harvesting.

The Ritzville farming community rose to the occasion for one of their own last weekend, in a big way.

On July 28, some 17 combines, as well as semis and bankout wagons, were put into action to help harvest the 1,200-acre wheat field of Larry Yockey, a fourth-generation farmer who earlier this year was diagnosed with stage IV melanoma-skin cancer.