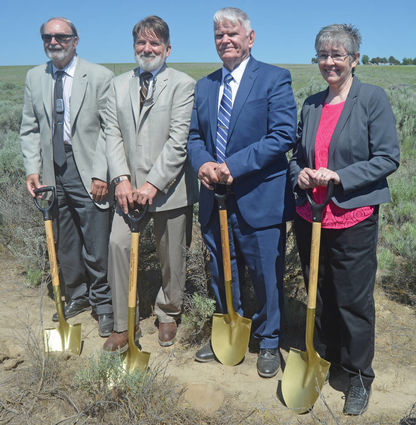 The May 24 groundbreaking for the Adams-Neilson Solar Farm was attended by Lind and Adams County officials, residents and representatives. The moving of dirt took place north of Lind, near the Lind-Ritzville Middle School. Local representatives involved were (from left) Adams County Commissioners Roger Hartwig, John Marshall and Terry Thompson, and Lind Mayor Paula Bell.

The Town of Lind took another step in the beginning stages of the Federal Emergency Management Agency (FEMA) road improvement work. During the March 27 meeting, Century West Engineering Project Manager Steve Nelson informed the Lind Town Council the company received bids from six contractors for the first phase of the FEMA road improvement project. Out of the six proposals submitted for the project, WM Winkler Company, out of Spokane, had the lowest bid at $332,459.

Trade issues, water and tax reform were the primary topics during a community leaders meetin...