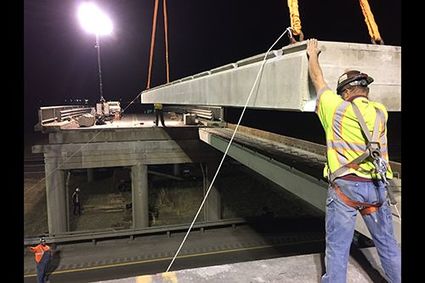 THE DANEKAS BRIDGE OVERPASS reopened after four weeks of repairs to fix the eastbound span, which was struck by an oversized semi-truck on July 10. In the photo, the construction crew works on hoisting one of the new bridge spans into place. -Photo contributed by Washington State Department of Transportation

The Danekas Bridge overpass on I-90 near the Tokio Weigh Station reopened on Oct. 29 after four weeks of repairs, a week ahead of schedule.

The repairs were necessary after an oversized semi-truck transporting an excavator struck the bridge because it was too tall earlier this summer on July 10. The semi-truck was traveling under the bridge and eastbound on I-90 when it hit the bridge, damaging the entire eastbound span and forcing the Washington State Department of Transportation (WSDOT) to limit traffic to just one lane of alternating traffic on the overpass.

According to WSDOT, due to the bridge being important to local and farming traffic and regional travel, Gov. Jay Inslee signed an emergency proclamation to qualify for federal funds for expedited repairs, which was estimated to cost more than $500,000. Spokane contractor N.A. Degerstrom was awarded the contract and began work on Oct. 1.

The original accident damaged the bridge’s girders and knocked loose concrete. According to WSDOT, the biggest and most visible part of the job was the demolishment of the eastbound bridge span and the subsequent rebuilding it. Crews also had to reinstall the railing and pave the bridge deck.

The demolition was completed in 36 hours in order to limit the disruption to traffic on I-90. The repairs required three closures of I-90 through this area, two 36-hour closures to demolish the bridge and replace the span, and one eight-hour closure to remove materials to allow for the early reopening of the overpass.

According to WSDOT the job was finished on budget and they are currently pursuing reimbursement costs from the freight hauler that hit the bridge.

WSDOT stresses that it’s the law for vehicle operator to know their vehicle height as well as bridge heights along their route. WSDOT provides an online bridge verticle clearance trip planner at wsdot.wa.gov/bridge/structures/BVCTP.htm.