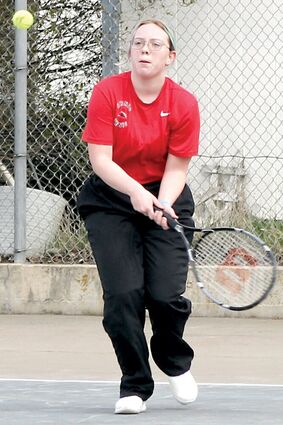 Destiny Wells in a match against St George's.

RITZVILLE – In one of the only sports events not cancelled, postponed or moved due to the spring weather last week, the tennis team served up against St. George's (Spokane) on Wednesday, April 13, at home.

When it was over, the Broncos may have wished for more snow.

Only one match went the Ritzville way, as the duo of Amy Anderson and Alexis Melcher defeated challengers in girls doubles 4-6, 6-3 and a 10-4 tiebreaker.

None of the other Bronco players won a single set.