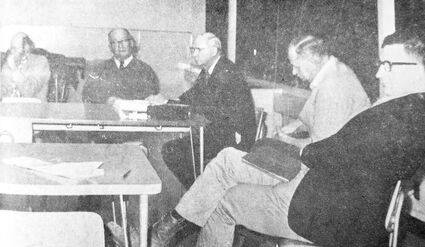 Declaring that the liquor interests are fighting harder to come back then they fought in the old saloon days, Captain Ebbert of San Francisco, general counsel for the Anti-Saloon League, made a please for popular support for law enforcement and for the league it its active work against the liquor interests at the M.E. Church last night.

In his introduction, Captain Ebbert briefly sketched what the present law can do to those violating it, from paying a penalty of jail or fine to abatement proceedings against his property, the slapping on of heavy internal revenue taxes, or the swearing out of the injunction against the law breakers.

Kicking out the windshield and crawling to safety saved three Yakima people from burning to death in an accident Saturday evening four miles northeast of Lind.

The 1939 Mercury sedan, driven by John D. Rehn and accompanied by his wife, Pauline, and daughter, Darlene, turned over on its left side following a collision and almost immediately burst into flames.

Mr.s Rehn managed to kick out the windshield and the three escaped practically unhurt, except for Mrs. Rehn, who was treated at the local hospital for minor injuries.

The Ritzville schools resumed Friday, a bright cold day, with absences totalling 79. Schools had been closed Tuesday, Wednesday and Thursday.

The Ritzville High School's absentee list Friday was 14 long, but that number jumped to 20 Monday.

But at elementary levels, there was improvement Monday. Only 18 were absent at Evergreen. There were 8 absent at Hawthorn's fifth and sixth grades Monday, and the attendance secretary hadn't learned yet the seventh and eighth grade absences at 3 p.m.

Spokesman Doug Heimbigner said Sanhaus' failure to obtain an elected officials bond, as required by law, will be the basis for the recall. It also is possible that the recall petition may not be limited to this item alone.

First step in the movement is the hiring of an attorney to write the recall action. Funds arne being solicited to not only prepare the action, but to defend it in Superior Court.