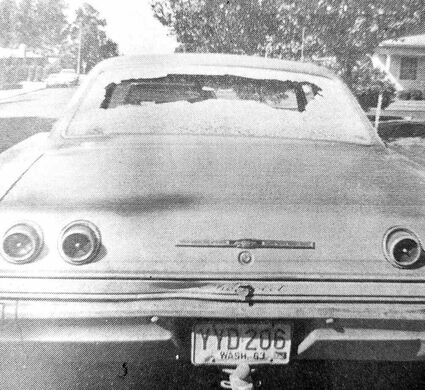 A photo from 50 years ago - Glass Decomposes – Dick Miller, recently graduated at the University of Washington law school, had this unwelcome "accident" happen to his car the Fourth. The glass decomposes under stress of rapidly changing outside temperature and constant high temperature in the car. Servicemen advise thermometer readings of 130 degrees are not uncommon inside a car parked on a warm day. Cracking the window a half inch is believed enough to prevent the glass from breaking. – Journal-Times photo

The safe at the Ritzville Ice and Creamery Company was blown by thieves last Friday night about 12:30. The night watchman at the mill reports three shots were fired, but as shots in the night are frequent occurrences in the neighborhood nothing was thought of it at the time. Evidently foiled in the first two attempts the burglars prepared the last charge with such care that the heavy door was torn from the hinges an hurled across the room, a distance of twelve feet, splintering the wall and wrecking some...