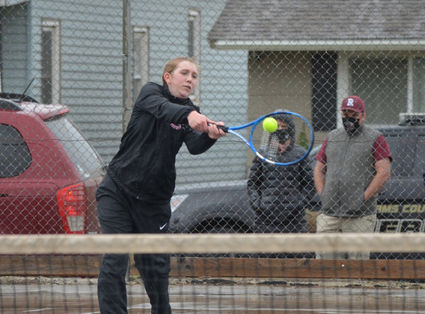 Amy Anderson backhands the ball in a match she won 8-0 Saturday, April 24.

RITZVILLE – The Broncos hosted the Reardan Indians in the rain Saturday, April 24.

"We played pro-sets of eight, due to the inclement weather," Head Coach Janna Gingrich said.

In Girls' No. 1 Singles, Amy Anderson won a match against Reardan's Bailey Christenson 8-0.

Serina Block of Sprague did not attend the match.

Earlier in the week, the Broncos traveled to Creston for a match against Wilbur/Creston.