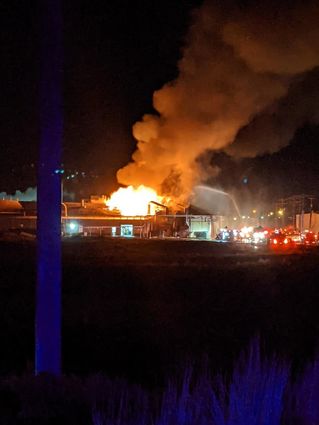 A fire at a Washington Potato Company processing plant in Warden led to a Level 3 Evacuation. The fire was called in around 5:30 p.m. Thursday, Jan. 21. Grant County Sheriff's office spokesman Kyle Foreman said this photo was taken early in the event.

WARDEN - Residents of Warden were allowed to return to their homes around 1 a.m. Friday morning, Jan. 22, following a Level 3 Evacuation notice.

The Level 3 Evacuation was called for around 8:30 p.m. Jan. 21 for areas west of Road U-SE and south of SR 170 in Warden, due to risk of an ammonia tank explosion when a fire broke out in a Washington Potato Company plant dehydrator at 1900 W. First Street.

"There was a fear that a large ammonia storage tank would explode due to the fire," Grant County Sheriff's Office spokesman Kyle Foreman said Friday morning. "Thankfully, that did not happen."...