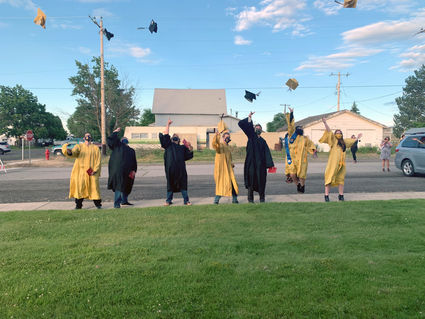 SPRAGUE — Family members and friends observed from the school lawn or their vehicles as eight students received their high school diplomas Saturday, June 20.

Houston asked the graduates to turn their chairs to face him as he addressed them.

"Whatever you're going to do, remember who you are and get to it," Houston told the graduates, adding he was never one to favor "taking a year off."

"Be-backs never come back," Houston said. "Sometimes you can grow roots in the couch. So go."

Most of the graduates expressed plans to work over the summer and save money for college or trade school in the fall. Stated dreams include working in the fiber optics or aircraft industry, computer science, the agricultural community, plumbing, web design, as a chef and as an athletic trainer.

Houston also advised the graduates not to develop the mindset they are owed something by society, as that would become a shackle on their life. 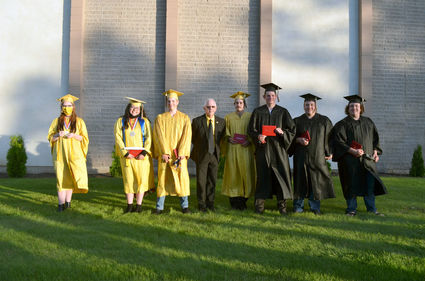 "How you react to life will determine your life," Houston said.

Facing the graduates with their backs to the past and their hearts open to the future, Houston reminded them of words written in the Declaration of Independence; including the right to life, liberty and the pursuit of happiness.

"Nowhere in this planet has founding truths like these," Houston said, adding they were individual, unalienable rights not to be given or taken away by government.

"All men are created equal. This is the foundation you are stepping out on," Houston said.

"This class endured more than any group ahead of them," Ressel said. "Every one of them rose up to that challenge. In their own way and in their own time, some of them, but every one rose to the challenge."