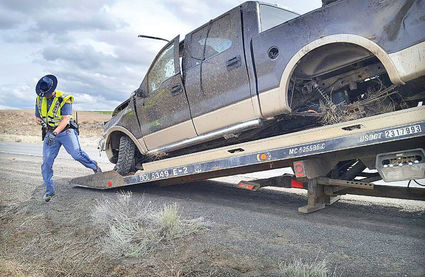 Washington State Patrol Trooper Cody M. Pierce check out a pickup truck involved in the fatal crash south of Lind as Chris Curtis of B&B Towing loads the vehicle on a tow truck.

LIND -- A Kettle Falls woman was killed Sunday morning when her pickup overturned.

Kristen K. Icenogle, 52, was pronounced dead at the scene near Milepost 70 on southbound U.S. Highway 395, the Washington State Patrol reported.

Her next of kin was notified of the 10:17 a.m. fatal crash; notification was completed by Chaplain Robert "Bob" Purdy and trooper Conner S. Bruchman, the patrol said.

A preliminary report says Icenogle's Ford F150 was southbound when it left the roadway and overturned when she overcorrected.

She was not wearing a seatbelt, the patrol said. It's unknown if alcohol or...