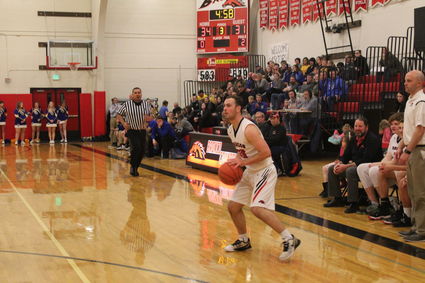 Spencer Gering prepares to shoot a three-pointer in Lind-Ritzville/Sprague's 57-52 win over Colfax on senior night.

RITZVILLE - Seniors led the way as the Lind-Ritzville/Sprague boys basketball team defeated Colfax 57-52 on Tuesday. Austin Thompson scored 21 points and had the game winning basket for the Broncos as he and three other seniors played their final game at Gilson Gym.

The Broncos had a shaky first quarter. They stuck with Colfax early, trailing at one point 10-8, before giving up a run to fall behind 20-8. Thompson then scored back-to-back baskets, including a three pointer, to make the score 20-13.