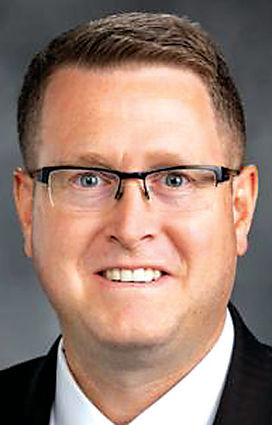 SPOKANE VALLEY – As the Legislature opened its 60-day session, Republicans outside Olympia lined up behind Rep. Matt Shea, saying he's being "Trumped" by Democrats and Republican Minority Leader J.T. Wilcox.

On Sunday, the 26th Legislative Republican District Committee, which represents part of Pierce County and the southeastern Kitsap Peninsula, announced its support for Shea.

Wilcox and the state Republican House leadership stripped Rep. Shea, R-Spokane Valley, of party affiliation and committee assignments Dec. 19 in the wake of a Democratic investigation into the lawmaker's purported domestic terrorism.

"I have been falsely accused of being a 'domestic terrorist' by a private investigator who never spoke to the principals involved in the incidents she described and relied instead on anonymous sources," he said in a social media post last week.

The lawmaker has vowed to continue to represent his constituents despite the allegations.

"I look forward to continuing to represent the people of my district," he said. "I do so with a renewed sense of the importance of our Constitution's protections for the powerless against the vindictiveness of the powerful."

Shea, who has not been charged with any crimes, has been targeted by Democrats in Olympia since an unverified report appeared on the Internet.

The report – initially written by a foreign national living in Portland, Ore., and submitted to a foreign-controlled Internet site – contained allegations of domestic terrorism taken from social media.

The report was then used by Seattle Democrats to call for Rep. Shea's ouster and drum up enough support to hire a private investigator to dig into the lawmaker's background and affiliations with rural, gun rights, property rights and other groups.

While the Cowlitz resolution was not available prior to press time, the 26th Legislative Republican District Committee is accusing Wilcox and others in Olympia of violating Rep. Shea's rights as guaranteed by the Fifth and 14th Amendments of the U.S. Constitution and Article 1, Section 3 of the state Constitution.

The strongly worded resolution implies Wilcox and others are assuming Shea's guilt rather than innocence, a direct conflict with American jurisprudence.

"... The presumption of innocence must be given and vigorously defended at all costs," the resolution said. "House Minority Leader Wilcox has denied Rep. Shea the right of due process and the right of justice without necessary delay.

"The 26th LDRC condemns the actions of Minority Leader Wilcox toward Rep. Shea and demand he be restored to all privileges and rights enjoyed prior to the public release of the investigation report until such time he has been charged and convicted of a crime by the lawful recognized courts."

The resolution passed by Yakima Republicans is in "support of Representative Matt Shea and condemning the actions of the WA House Republican Caucus Leadership."

According to the resolution, Rep. Shea has been a great lawmaker "defending freedom, liberty and the Constitutions of the State of Washington and the Unites States of America."

It goes on to say that the hired investigator – Rampart CEO Kathy Leodler – is a "contributor and supporter of far left social Democrats and Marxists with a political bias."

The Yakima resolution says Shea has been denied due process, something Shea himself has stated on multiple occasions.

Former Spokane Valley Mayor Rod Higgins was previously vocal about his support for the lawmaker from his hometown, voicing concern last month that Democrats have been targeting the lawmaker for months.

And he's not the only one.

Grays Harbor County Republicans have drafted a resolution to support Shea and are pushing other counties to follow their template.

They are expected to take up the issue this coming weekend when the party's state meeting takes place in Yakima.

Some Republicans, however, aren't waiting.

In a letter addressed specifically to Rep. Wilcox, Tyler G. Miller said there are "many troubling aspects of this situation."

Miller, a Kitsap County Republican committeeman, questioned the report, whether Rep. Shea was provided a copy and whether the Spokane Valley lawmaker was given an opportunity to respond prior to any decision to suspend him.

The Republic leadership was allegedly split on Shea's suspension.

The leadership did not release the names of which members voted to suspend Shea and which were opposed; Tyler called for the roll-call vote record to be released to the public.

He also asked for clarification on what process has been established for Shea's reinstatement.

"Many within our party have expressed grave concern that leadership has, in fact, denied Representative Shea this right (to a fair process) in the actions that have been taken thus far.," Miller wrote. "There has even been an analogous comparison of this situation to that which President Trump has undergone over the past three years."

Miller was referring to the impeachment process against President Trump in which Democrats used a political hit piece, the Steele dossier, to launch an investigation.

The dossier has since been debunked as a document funded by the Hillary Clinton campaign containing unfounded allegations.

Miller asked for Wilcox to provide answer to his and other questions prior to the state Republican committee's meeting Jan. 17.

Rep. Shea, who is running for his sixth term in the state House representing the 4th Legislative District, has been a staunch advocate of private property and gun rights, western states, ranchers and splitting Washington into two states during his tenure.

He came under fire from Democrats first for his involvement in Coalition of Western States then for his effort to split Washington and create the state of Liberty from the 20 counties east of the Cascade Mountains.

When those issues failed to bounce him from the House, Democrats launched an attack on his religious beliefs, using social media allegations that he had written a document calling for the killing of all non-Christian males should war break out. Shea said those allegations were taken out of historical context from a sermon.

Most recently, the report from the Democrat-led investigation of Rep. Shea also declares him to be a "domestic terrorist" because he allegedly "planned, engaged in and promoted" the Bundyville and Malheur National Wildlife Refuge standoffs in 2014 and 2016, respectively.

Rep. Shea did travel to those sites during the standoffs.

But Ammon Bundy, one of the primary protesters in each of the standoffs over the use of public lands, disputed that allegation, calling it "100% incorrect, false."

Bundy said Rep. Shea had "nothing to do with it (Malheur)... Any planning and him being a part of it is just absolutely incorrect."

Bundy and others in the core group of protesters were acquitted in both cases, with judges citing misconduct by the federal prosecutors and FBI agents.

Prior to the opening of the session, however, new Speaker of the House Laurie Jinkins, D-Tacoma, again called for Rep. Shea's ouster.

During a meeting with reporters on Thursday, Jan. 9, Jinkins said: "Matt Shea should resign. If he does not resign, he should be expelled."

But she acknowledged that is not likely to happen.

Expulsion of a House lawmaker requires a two-thirds majority, and with Republican support building for Shea, neither her nor Minority Leader Wilcox see that happening.

"I cannot expel him without a super-majority," Jinkins said.

In Olympia, that's not easy.

The only lawmaker ever kicked out of the House is Rep. Nelson Robinson, who was tried and convicted of the statutory rape of a 12-year-old girl in 1933.

There are no charges currently pending against Rep. Shea, even though Democrats previously forwarded their "dossier" on him to the FBI and U.S. Attorney's Office.

"I have heard nothing from either office," Shea said last week.