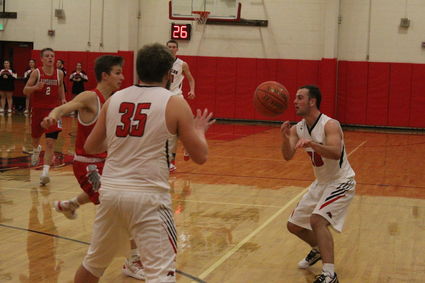 Spencer Gering makes a no-look pass to Cole Cameron in the LRS Broncos' 51-42 win against the Riverside Rams on Dec. 7. Gering scored 14 points in the victory, leading the team.

LRS boys basketball head coach Dustan Arlt said his team exceeded his expectations in almost every facet of the game in the 2019-20 season's opening weekend, as his team went 2-0 to start a season for the first time since 2013-14.

The Broncos took to the road and dispatched the Columbia-Burbank Coyotes 51-38 in the first game of the season on Dec. 6, and then beat the Riverside Rams--a 1A school--at Gilson Gym 51-42 the next day in the team's home opener.

"After last year being tough and ending kind of tough, it was good for these kids to get the confidence knowing that some of the things w...