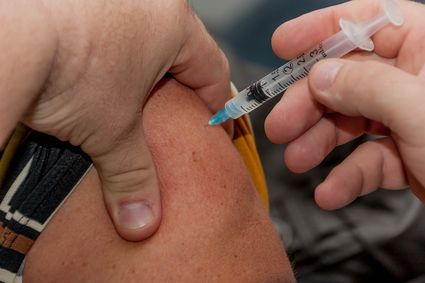 A person receives a flu shot.

Adams County Health Officer Dr. Alexander Brzezny issued an alert regarding influenza activity in the county in a news release on Dec. 9.

The county says that children have been particularly affected by the influenza activity, with some of the county's schools reporting absenteeism as high as 20% in the past several weeks. Parents have been reporting their children with general flu-like symptoms, such as a fever, chills, cough and muscle aches.

Lind-Ritzville Schools superintendent Don Vanderholm said that during the week of Thanksgiving, as high as 18% of students were recorded missing school due to sickness at one of the district's schools. Vanderholm said that each school tracks their attendance and, at his request, sends him and the district's nurse an email whenever 20 or more students are absent from that school.

Statewide, there have been three lab-confirmed influenza deaths reported in Washington for the 2019-20 influenza season. None of those deaths have been reported in Adams County.

In the news release, ACHD urged all residents aged six months or older to get their flu shot as soon as possible if they haven't already.

"Flu activity typically increases in the winter months when people spend more time indoors around each other," the ACHD news release says. "People who haven't been vaccinated against the flu still have time to get the vaccine before the season reaches its peak."

ACHD recommends only injectable flu vaccines (flu shot) this season, and reminds people that, yes, the flu shots do work. According to the Center for Disease Control, a flu shot reduced a child's risk of ending up at the doctor's office sick with flu by more than 60% last season.

For children aged six months through eight years old, ACHD says they will need either one or two doses of vaccine, depending on prior flu vaccine history.

ACHD also reminds people that people with the flu can make others sick one day before symptoms appear and up to five days after symptoms begin. If you or a family member are sick with a flu-like illness, ACHD says to stay home from school or work for at least 24 hours after your fever is gone--without the use of a fever-reducing medicine--unless you need to leave to receive medical care.

"Use a tissue to cover your nose and mouth when coughing or sneezing and throw it away," ACHD says. "It is very important to wash your hands often. Use alcohol-based hand sanitizers when soap and warm water are not available."

People with asthma, diabetes, chronic lung disease, heart disease, and people over 65 years old are among those who are at a higher risk for developing flu-related complications. Infants are at an increased risk for flu, caregivers who are sick should wear a mask when caring for an infant.

Pregnant women are also at serious risk of flu complications.

"The flu shot is safe and recommended at any stage of pregnancy," ACHD says. "When expectant moms get a flu shot it protects the baby inside too--for up to six months after birth. Get a flu shot to protect you and your growing family."

Flu vaccines are available at Adams County Health Department Clinics in Othello, at 425 E Main St.; Ste 700, on Monday afternoons, Tuesdays, and Thursdays, or in Ritzville at 108 W. Main St. on Wednesdays.

For further information about influenza vaccination and prevention, people are urged to contact an Adams County Health Department Public Health Nurse at (509) 488-2031 or (509) 659-3315.