Broncos drop to 1-3, look ahead to league opener 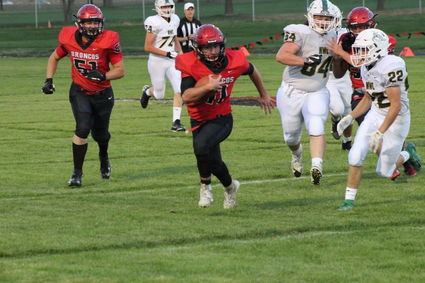 LRS running back Austin Thompson evades a defender as he tries to run for a first down.

The Lind-Ritzville/Sprague Broncos football team ended its early season non-league schedule on a down note, falling 34-13 to the Columbia (Burbank) Coyotes to drop to 1-3 (0-0 in league play) on the season.

The Bronco defense limited the Coyotes to just 62 passing yards on 3-12 passing but gave up 261 rushing yards, including an 86-yard touchdown run early in the opening quarter. Offensively, Columbia outgained LRS 323-217, despite the Broncos running six more plays and winning the time of possession by three minutes.

Columbia took a 13-0 lead late in the first quarter following an intercep...