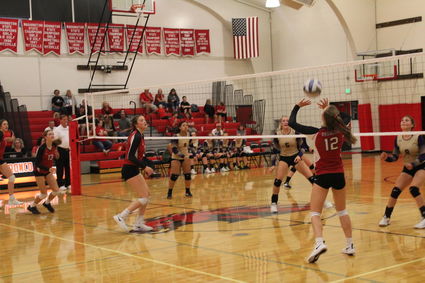 Sydney Kinch sets up one of her teammates for a kill in LRS' victory.

The Lind-Ritzville/Sprague Lady Broncos volleyball team had a strong opening week of play, defeating Reardan on the road on Tuesday and Columbia Burbank at home on Thursday.

Tuesday's match was all LRS as the Lady Broncos won in straight sets (25-13, 25-12, 25-13). Taylor Galbreath led the way with eight assists and six digs for the Lady Broncos. She also had five aces.

Thursday's match against Columbia Burbank was a closer affair.

The first set was a wild one marked by CB pulling ahead and LRS storming back. After LRS op...