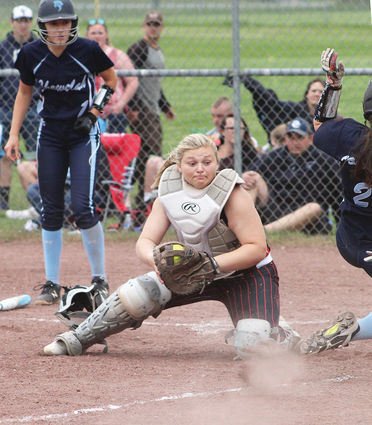 Senior catcher Lacey Miller tries to apply the tag on a play at the plate in the Lady Broncos' 11-2 loss to the Chewelah Cougars in their first game of the Northeast 2B District Tournament on May 14. Miller was voted as the League MVP by coaches in the South Division.

The Lind-Ritzville/Sprague Lady Broncos softball season came to an end over the weekend in the Northeast 2B District Tournament, as the team came up one win shy of guaranteeing a second consecutive berth to the 2B State Tournament.

The Broncos, the No. 3 seed from the South Division, opened the double-elimination tournament on May 14 with a tilt against the Chewelah Cougars, the No. 2 seed from the North Division. Chewelah finished regular season league play 6-2, with their only losses coming against the Northwest Christian Crusaders, who would go on to win Districts.