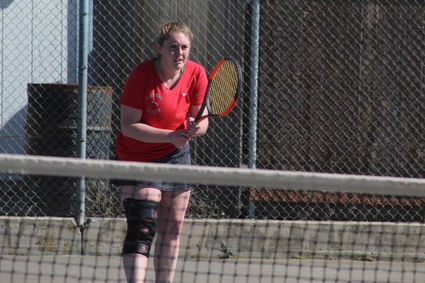 Junior Katheran Gingrich awaits to return a serve in a league match at home during the regular season. Gingrich was the last Broncos player standing at the District Tournament last weekend, just missing out on advancing to the Regional Tournament.

The tennis season came to an end for the Lind-Ritzville/Sprague Broncos last week in the Northeast 2B District Tournament.

No players from the Broncos were able to advance to the Regional Tournament this weekend, but some came awfully close.

In the girls singles bracket, both No. 1 and No. 2 LRS singles players Claire Kessler and Katheran Gingrich easily won their first match on May 7, both winning 6-0, 6-0 to move on to the second round. Kessler won her match via forfeit, while Gingrich took down Jordan Larmer from Harrington.

In the second round of action, also taking place on May 7, Kess...