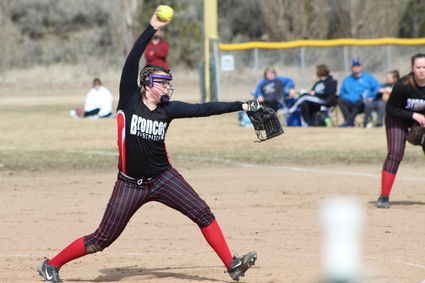 Junior Cailey Vallone was in the pitching circle for both of the Lady Broncos' games in the team's home doubleheader against the Colfax Bulldogs on March 23. LRS lost both games, but head coach Todd O'Brien was pleased by Vallone's performance.

After two cancelled games and a jamboree to start the season, the Lind-Ritzville/Sprague Lady Broncos softball team finally took the field on March 23, nearly a month after the first day of practice.

The Lady Broncos hosted the Colfax Bulldogs for a league doubleheader, losing 13-2 and 21-3 to move to 0-2 on the very young season.

Much of the damage from Colfax's bats came in the first inning in LRS' 13-2 loss. The Bulldogs scored six of their 13 runs in the first inning, but would have been limited to just one run in the opening frame if not for fielding woes from the Lady Broncos. The ga...