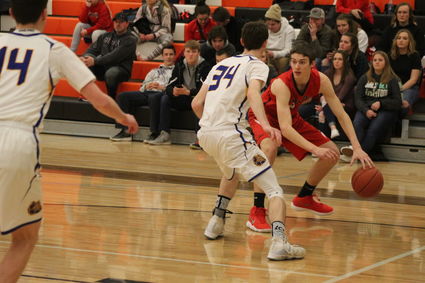 Sophomore Drew Kelly fends off his Colfax defender in the Broncos' 68-48 loss to the Bulldogs in the second round of the Northeast 2B Conference Tournament on Feb. 7 at West Valley High School. Kelly scored eight points in the loss, all of which came in the second half.

It's been a tumultuous week for the Lind-Ritzville/Sprague Broncos basketball team, as the winter weather that has pounded the state has wreaked havoc on the schedule for the Northeast 2B Conference Tournament.

The Broncos were able to play their first two games of the tournament without any problems, as they beat the Kettle Falls Bulldogs in their opening game of the tournament and lost to the Colfax Bulldogs-the South Division regular season champions-in their second round game Feb. 7, dropping them to the consolation bracket.

The team's next game in the tournament was scheduled for Feb....