The community showed up in enormous numbers to support one of their own at the Larry Swift Benefit Dinner & Auction on the night of Jan. 26. Swift, the Director of Public Works for the City of Ritzville, has been in a fight against cancer.

So ... you couldn't find an evening parking spot anywhere near downtown Ritzville last Saturday evening? Hordes of people streaming toward the Legion Hall? Well, you just got caught in a small town's heartfelt appreciation for one of their own who needed a bit of support in his fight against cancer.

The Legion Hall was stuffed with dinner tables, auction items and more than 200 citizens who came to pay tribute and raise funds to benefit Larry Swift, the long-time Director of Ritzville's Public Works Department.

Sharon Oestreich, chair of the group to put on the benefit, described Larry as a "hometown boy," always helping others and putting others first. He is an avid hunter and fisherman, and has been around to provide help with Ritzville events--for example, driving the Ritzville float in parades as far away as Montana. She described a phone visit when Larry was over on the western side of the state where during conversation he was more interested in how her well was working than talking about his own situation.

The Benefit Dinner and Auction, hosted by the Ritzville Eagles, was announced to begin at 6 p.m., but by 5 p.m. the hall, side alcove and lounge was overflowing with anticipation, conversational hum and seat-seekers. At the appointed hour, Master of Ceremonies Stephen McFadden took the microphone to quiet the crowd and announce that after surgery five days before, post-surgical tests indicated Larry is free of cancer at this point-to thunderous cheering and applause.

At that point, M.C. McFadden read "A Letter of Thanks from Larry":

"I'm not sure what I did to deserve all the work, effort, and donations that so many have contributed. Words cannot express my gratitude and I could never repay you all for your support and generosity. The number of people and organizations that helped to make this night possible is truly humbling and I can't thank you all enough.

I hope it won't be long and we will be back to having 'just one more.' I can't wait for that time ... I could go on and on, but there is a party to be had. And I have never been one to stop a good party.

So thank you all! Have a good time and have one for me ... And know that I am truly honored to be able to say that I have the best family and friends in the world!"

The party was well under way when dinner by James Wahl was announced; the line passing salads, baked beans and smoked chicken was surprisingly efficient so there was little waiting, considering the large crowd to be fed. A silent auction was available for two hours between 5 and 7 p.m. Donations for auction items was "overwhelming" according to benefit planners.

At promptly 7:15 p.m., the silent auction was closed and auctioneer Warren Kragt took over with the live auction. Though serious in raising funds to help Larry, the tenor of the auction was party-like at times, and Dr. Kragt noted that being this was a benefit auction, he was comfortable allowing the overly enthusiastic crowd to enjoy the process. And enjoy they did. When bidding stalled, there was the sort of prompting that might only happen among friends and neighbors.

Part way through the auction, the kitchen announced that there were 12 bags of smoked chicken thighs left over. Kirk Danekas (former Ritzville mayor for 12 years) stepped up to give auctioneer Kragt a break and "sell" the bags of chicken. He was successful, though it is unclear if he was "auctioning" or "selling." He did note that it may have been easier to auction off breasts instead of thighs. In any case, some folks got to enjoy pretty good chicken thighs for a number of dinners to come.

Despite the fun, former mayor Danekas turned serious when he noted that he had a number of Public Works Directors during his tenure, and "nobody was as good as Larry Swift." 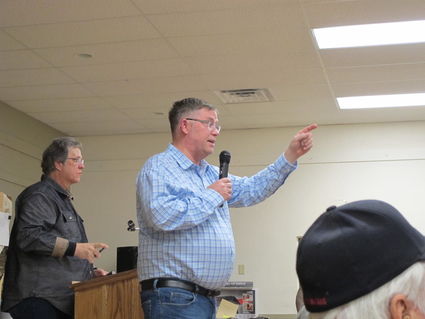 Dr. Warren Kragt (right) served as the auctioneer at the Larry Swift Benefit Dinner & Auction on Jan. 26. All told, some $40,000 was raised for Larry Swift and his family.

The evening ended on a high note to auction off a "Mancave Wild Game Feed for 10." The pattern reflected the theme of the evening: "Just One More," a frequent phrase heard from Larry. As bids crept higher and higher, calls for "just one more" kept coming, and the final item reached "just one more" for the last time.

Success of the Benefit Dinner and Auction might be measured in many ways: great food, lively conversations, the fun of the auctions, but there is one way that best measures success: add the meal tickets, the silent auction, the live auction, the donations and the money tree, and the sum measures the heart of Ritzville as well as the love and respect for one of Ritzville's own-upwards of $40,000 raised for the Swift family.