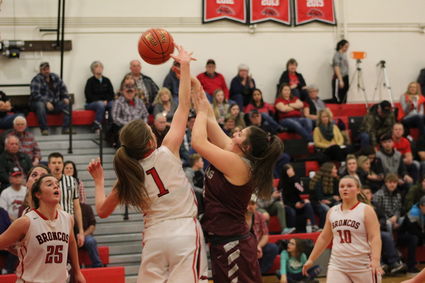 Freshman Dakota Killian blocks a Reardan player's shot in the Lady Broncos' narrow 45-43 loss to the Indians. Killian led the team in scoring with 10 points.

The Lind-Ritzville/Sprague Lady Broncos basketball team returned to the court last week for its first games since Dec. 21, falling in two narrow and hard-fought games at home.

The Lady Broncos faced off against the Reardan Indians in the Gilson Gymnasium on Jan. 4, their first league game since defeating Colfax on Dec. 14. The game was neck-and-neck throughout, with the Indians taking a two point lead into the break and eventually winning by two points, 45-43.