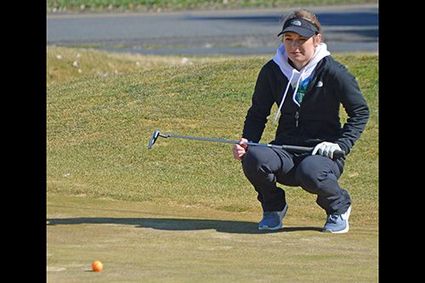 ELLIE GERING attempts to sink in a put during the March 20 league match at the Ritzville Municipal Golf Course. She finished the match with a 59. -Journal photo by Al Stover

The Lind-Ritzville/Sprague Broncos golf team began their season with two Northeast 2B League matches in March.

The Broncos competed in Ritzville on March 20, followed by a match in Harrington on March 27.

LRS was scheduled to compete in a nonleague match at St. John on March 22, but Head Coach Nick Weishaar said the contest was not finished because of poor weather conditions.

During the Ritzville match, Spencer Gering, who was the only Bronco golfer in the boy’s division, shot a 49 after nine holes. Gering finished 11 strokes behind Tekoa-Rosalia’s Dawson Stobel, who finished with a...