By Ashley Parkinson
The Journal 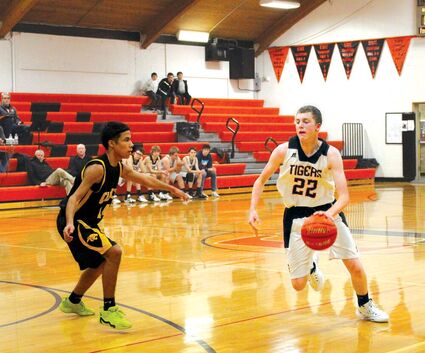 Zach Claassen takes on a Cusick team member in an attempt to make a shot on Saturday, Dec. 17. Odessa lost 63-44 to Cusick.

The first quarter ended with the Tigers down by 15, with Cusick leading 19-4.

However, Cusick came back with a lay-up early in the second quarter.

The Tigers increased momentum throughout the second quarter but fell back behind, with Cusick leading 30-15 by halftime.

The start of the third quarter was a back-and-forth battle for Odessa to get the upper hand. For every attempted three-pointer made by the Tigers, Cusick came back with its own.