By Teren Kowatsch
The Gazette 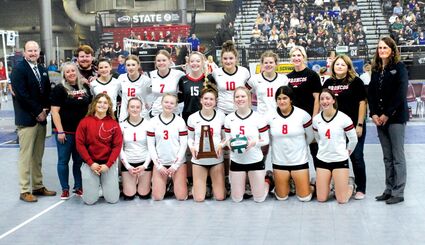 The Lind-Ritzville/Sprague Broncos pose with their sixth-place plaque after a match against the Adna Pirates on Nov. 11 at the Yakima Valley SunDome in Yakima. For more state coverage, see Page B1 (photos) and Page B4 (story on early games).

YAKIMA – The Lind-Ritzville/Sprague Broncos suffered a loss in a quarterfinal matchup on Nov. 10 at the WIAA 2B State Tournament in Yakima.

This loss meant that the Broncos couldn't finish better than a fifth-place finish in the tournament. To get to that the fifth/sixth-place game, they had to defeat league rivals Liberty (Spangle).

Which is exactly what Lind-Ritzville/Sprague did.

"It's so exciting to be able to redeem ourselves after losing to (Liberty) in the Districts," Lind-Ritzville/Sprague coach Cari Galbreath said. "But it's also really cool that we have two teams from the same d...