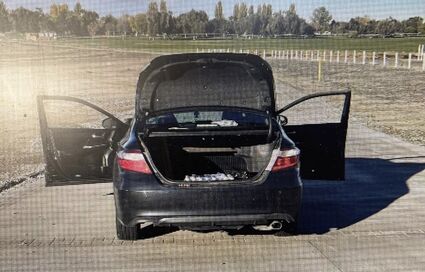 Deputies arrested Lorna Paol Villanueva-Ozuna, 23, of Moses Lake, for possession of the vehicle pictured, which was reported stolen.

OTHELLO – A Moses Lake woman was arrested Nov. 7 for possession of a stolen vehicle following a traffic stop.

Lorna Paol Villanueva-Ozuna, 23, of Moses Lake was arrested for possession of a stolen vehicle and booked into the Adams County Jail.

According to a report, a deputy patrolling West Bench Road was alerted to a stolen car by his in-car automatic license plate reader.

The deputy followed the car and conducted a "high-risk" traffic stop in the 800 block of South Taylor Road, records show. Villanueva-Ozuna was the...