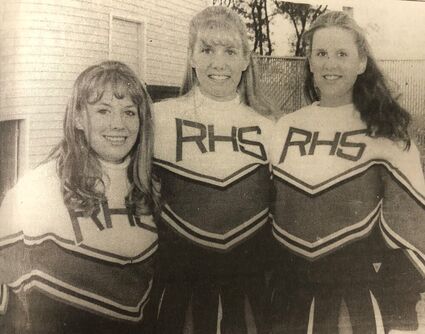 RITZVILLE CHEERLEADERS who attended the cheerleaders' camp this past summer in Ellensburg were, from left, Kasie Geschke, Courtney Schilling and Kamie Parrish. The girls received four superior ribbons and two excellent ribbons during the July 21-25 camp. The trio also were voted to received Leadership Rally Ribbons.

Several fires have occurred during the past week. Only one caused much damage, that was a barn near the Henry F. Shafer house on West First Ave. which burned during the noon hour Saturday. The barn was completely destroyed. It was the property of Elmer Snooks. Wm. Thom looked after it though he had nothing in it except some doubletrees. It is supposed that some transients had been occupying the barn and started a fire which caught the barn.