By Teren Kowatsch
The Journal 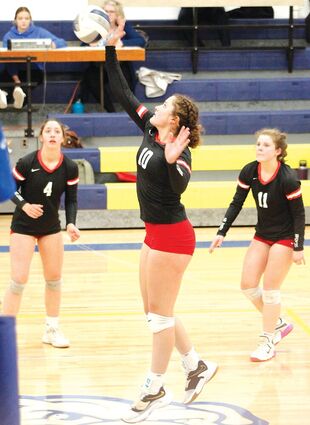 Broncos freshman Saige Galbreath hits the ball in the district game against Northwest Christian (Colber) on Nov. 3 in Colfax.

COLFAX - The path was simple for Lind-Ritzville/Sprague/Washtucna/Harrington on Thursday, Nov. 3. Win two games and you go to state. Lose once – and you're eliminated.

Win was exactly what the Broncos did – defeating the Northwest Christian (Colbert) Crusaders in three sets to advance to the consolation bracket final, then beating the Upper Columbia Academy Lions in four closely-contested sets to punch their ticket to state.

The final rounds of the Northeast 2B district tournament took place at Colfax High School.

Colfax won the tournament, followed by Liberty (Spangle) in second and Li...