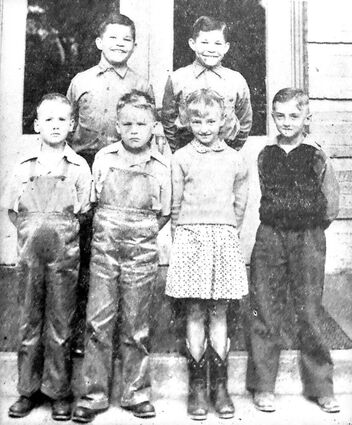 Photo from 75 Years Ago Ritzville-Journal Times

October 30, 1947 Three Sets of Twins Attend Central School Three sets of twins are enrolled at Central school this year and they are so near alike that it keeps everyone puzzled, especially the teachers. Front row left to right are: Wayne and Duane Koch, Anna and Peter Peot. Back row left to right are: Harvey and Stanley Razey. Wayne and Duane Koch are in the first grade this year and are the sons of Mr. and Mrs. Berthold D. Koch of Ritzville. Anna and Peter Peot are in the second grade and are the son and daughter of Mr. and Mrs. Leo M. Peot of Washtucna. Harvey and Stanley Razey are in the sixth grade and are the sons of Mr. and Mrs. Henry B. Razey of Ritzville. – Journal-Times photo

J.B. Slagel of Oroville, who has been at Mrs. Allen's here recovering from a fracture of the leg, was found to be suffering from a gunshot wound, the cause of which he refuses to disclose. The case is one which is forming quite a mystery for local authorities. During the Round-Up week, on Thursday, at an early hour that morning Slagel and a man named Louie Prince, also of Oroville, were driving a Ford truck on the Central Washington highway south from Lind when the car overturned. In the morning a passing motori...