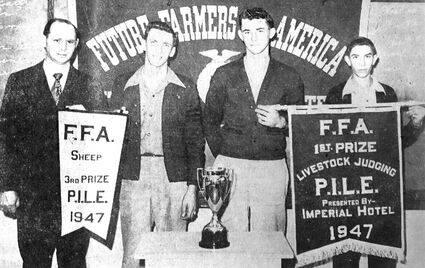 Here is the championship F.F.A. livestock judging team of the Northwest, who won the honor last week at the Pacific International Livestock Exposition at Portland in competition with 56 teams in Oregon, Washington and Idaho. The Ritzville team above is Jim Webb, coach and instructor, Lawrence Kiesz, Richard Heimbigner and Howard Gering. Howard was also hig individual for the contest, which saw 168 boys competing.

The hard-fought legal battle as to whether Olive Street was a street or private property was settled in a decision handed down by Judge Truax on Monday. He decided that it was a street of the municipality of Ritzville and therefore that William Koch, who closed the street last summer, was guilty of violating an ordinance of the City of Ritzville. Koch claimed that the street was never properly dedicated. He put a fence across the street last summer and this blockaded J.P. Koch's entrance to the city, so the acti...