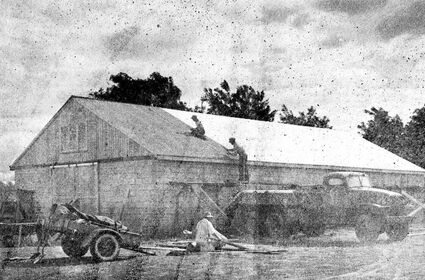 A photo from 50 years ago – Fair building construction: The finishing touches of the outside work being applied to the new Adams County Fair building. The building, 30x60 feet, is constructed of concrete blocks, has a full, smooth concrete floor and has space enough for 14 exhibit booths.

The case of the City of Ritzville against William Koch, charged with obstructing a street, was tried on appeal in the Superior Court Monday. The case involved some disputed law points and the lawyers are to submit briefs and Judge Truax will hand down his decision later. The contention of the defendants, who do not deny putting a fence across the street in question, Olive Street, is that it is not a street, and the history of the tract in question was brought into the case.

Dance to be held

The girls of the Future Homemakers of America are sponsoring a dance to be held tomorrow, Friday night, on the tennis courts of the high school. The proceeds will be used for the improvement of the courts. All high school members and the members of last year's alumni are invited.

Allen Kayler's '56 Chevrolet was struck by a hit and run driver while parked Sunday afternoon on Fourth Avenue near his parents' home.

Chief Donald Koehler received the report of a neighbor who saw the accident, but not enough information to uncover the driver's identity. The car was traveling east on Fourth and smashed into the Kayler car's left front end. Since Kayler had removed the bumper, damage to the hood and the front fender was extensive.

Adam's County Sheriff's Deputies arrested Terry G. Beckner, Jr., 28, of Washtucna, for assault in the first degree on the morning of Sept. 14.

Adams County Undersheriff Jay Weise said earlier that morning that Beckner allegedly threatened a 25-year-old male victim from Wilbur with a firearm and then left the victim beside the roadway near the intersection of the Benge-Washtucna and nearby Stevenson roads.

The victim was not injured in the confrontation and then walked to a nearby farmhouse, according to Weise. Weise said the victim had just met Beckner the previous day at a party. The firearm was recovered.