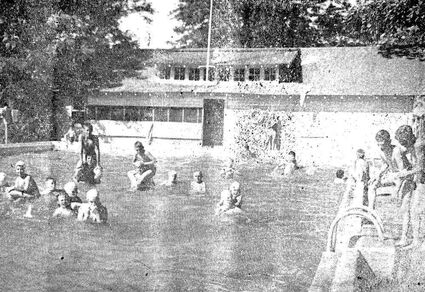 A photo from 75 years ago – "Come on in, the water's fine," these youngsters seem to be saying when the city swimming pool opened last Wednesday, but actually it was a bit chilly on opening day. The pool has been growing in patronage with warmer weather and is probably the most popular spot in Ritzville at present.

Ballots were received by the section men employed on the Northern Pacific at this point, as well as by others on all principal lines of the railroad. The men here voted to strike against recent wage cuts. The wages of the section men have been 40 cents an hour and are reduced to 36 cents after July 1. The majority vote in favor of a strike and one may take place, participated in by maintenance of way men and shop workers. Railroad officials doubt if the strike will be pulled off. If it is, they think the places...