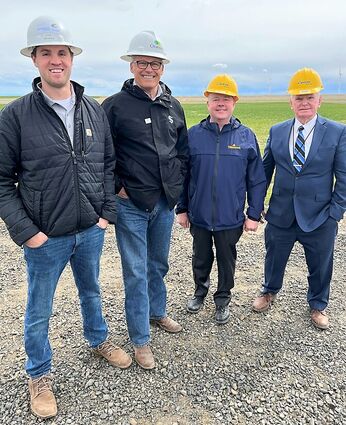 Gov. Jay Inslee, second from left, poses for a photo at Rattlesnake Flats near Ralston on Wednesday, April 20.

RALSTON – A month after vetoing sections affirming local input into development of solar and wind farms, Gov. Jay Inslee tried last week to put a positive spin on his move.

The governor spent part of Wednesday, April 20, at Rattlesnake Flats Wind Farm north of Washtucna, in the heart of the 9th Legislative District represented by Sen. Mark Schoesler, and Reps. Mary Dye and Joe Schmick.

Dye and Schoesler have been vocal opponents of the I...