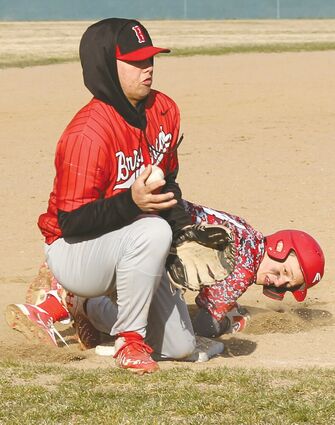 Davenport senior Ashton Lebo attempts to slide safely into third base against Lind-Ritzville/Sprague. The Gorillas fell to the Broncos in both games of a doubleheader Friday, April 15.

On April 12, the Broncos traveled to Spangle for a double header with the Liberty Lancers.

Owen Telecky had two hits in the game, including a solo homerun.

The second game was played over two days – April 12 and 14 – after the game was suspended due to darkness.

In what sounds like a football score, the local boys lost 3...