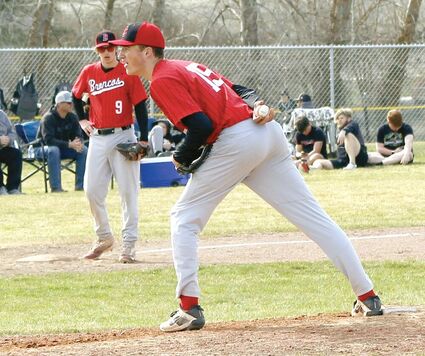 Chase Galbreath looks in at home plate versus NWC and Jayce Kelly watches from third base.

The boys swept Davenport on Tuesday, March 22, and was swept by Northwest Christian (Colbert) on Saturday, March 26.

Against Davenport, Owen Telecky scored the game-winning run on a wild pitch in the bottom of the 6th inning, and Jayce Kelly recorded a save in the top of the 7th to give the Lind-Ritzville/Sprague/Washtucna Broncos a 2-1 win over Davenport in the first game of a non-league doubleheader.

In the late game, Chase Galbreath was the winning pitcher.