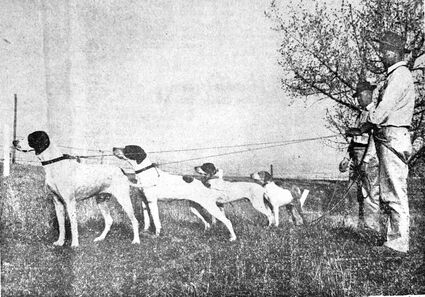 A photo from 75 years ago – Four top ranking field trial pointers who are expected to play starring roles in the Blue Mountain field trials being held this weekend. At left is "Glamour Boy," owned by D.D. Peebles of San Francisco and held by Pete Marker of Woodland, Cal.

During the past week, the time of the Superior Court has been occupied almost entirely with the hearing of the cases arising out of the so-called Dudman notes.

Harry Dudman operated in this territory in 1919 and 1920, selling stock in the Bethlehem Gold Mines.

The notes were sold by him to the banks in different towns, a large number being purchased by the First National Bank of Ritzville of by the Pioneer National Bank before the two were consolidated. The bank because of the refusal of som...