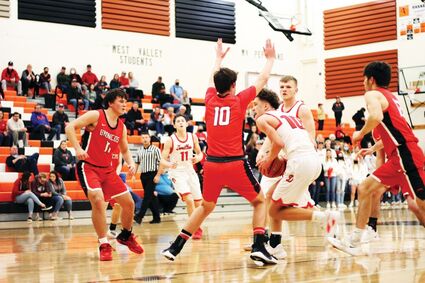 SPOKANE VALLEY – Two nights ago, No. 3 Davenport was a controversial no-call away from upsetting No. 2 Colfax, advancing to the district finals and earning an automatic berth to state. But it wasn't to be, and tonight it was No. 5 Lind-Ritzville/Sprague doing the upsetting as the Broncos ended the Gorillas' season with a 65-58 victory in a District 7 2B Tournament loser-out game Thursday, Feb. 17 at West Valley High School.

The Gorillas didn't look particularly rusty out of the gate, taking a 15-12 first quarter lead. But the Broncos went on a second quarter spurt to take a 29-26 halftim...