Hundreds of girls from schools across most of Eastern Washington, minus the Yakima Valley and Tri-Cities, faced off Saturday, Feb. 5, at the North Girls Subregional. The Top 5 competitors in each weight advance to regionals.

SPANGLE – A local girl has qualified to advance to regionals this coming Saturday in Ephrata.

Miller opened the tournament by pinning Mackenzie Newell of North Central in 50 seconds, but lost her quarterfinal bout to Shannon Workinger of Quincy by pin in 51 seconds.

In the consolation bracket, Miller pinned her next two competitors – Amyah Chavez of Othello in 1:13 and Aurora Carranza in 1:24.

She then lost by pin to Arianna Waters of Lake Roosevelt in 1:34, dropping her into the bout for fifth place. 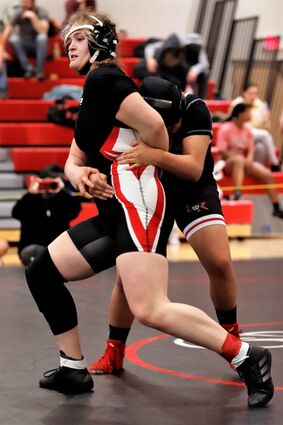 Lind-Ritzville's Myra Miller stands up on an opponent during the North Girls Subregional tournament on Saturday, Feb. 5.

In that match, she pinned Kately Rodriguez of Moses Lake in 53 seconds to secure her regionals berth.

Miller is coached by Walter Crow and Keith Johnston.