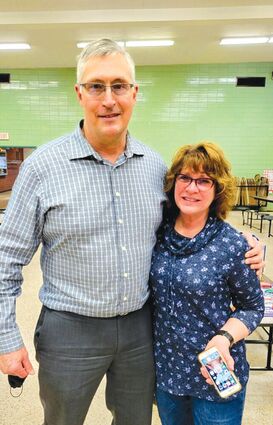 Bill & Ginny Ressel came to Sprague in the 1980's, have taught and now administers in Sprague Schools for over 30 years. Bill said, "We were shocked and humbled and felt there are so many others in our community more deserving. We are home here, this is our community."

SPRAGUE – Bill and Ginny Ressel were named Citizen of the Year in abstentia on Monday, Jan. 17, during the Sprague Chamber of Commerce's annual banquet.

The couple was on vacation at the time they were named publicly by the Sprague Chamber of Commerce.

They learned of the award when the returned to turn on Wednesday, Jan. 19.

"Bill and Ginny are giving, caring people who have made our community a more attractive place to live," a nomination letter said.

The couple has lived in the community for more than 30 years and supported the schools and chamber, the letter said, noting they are bo...