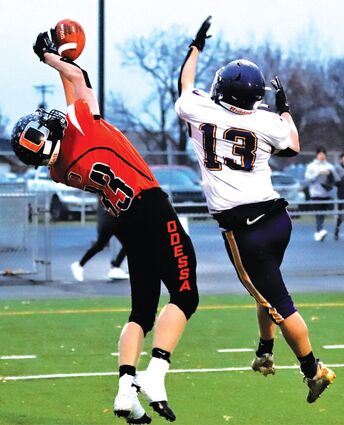 Odessa's Daeton Deife receives a pass in Saturday's game against the Quilcene Rangers.

MOSES LAKE –The Odessa Tigers run at a state 1B football title ended Saturday, upended by the Quilcene Rangers.

The Rangers won the state semifinal game, 36-12, to advance to the title game against Almira/Coulee-Hartline, which won the other semifinal, 68-32. Both games took place at Lions Field.

Odessa came out strong, with a straight-ahead ground game.

The Tigers scored first with 8:43 left in the first quarter. The 2-point conversion attempt failed, and Odessa led, 6-0.

Quilcene responded in kind, running straight ahead and scoring with 3:44 left in the first quarter. The 2-point conv...