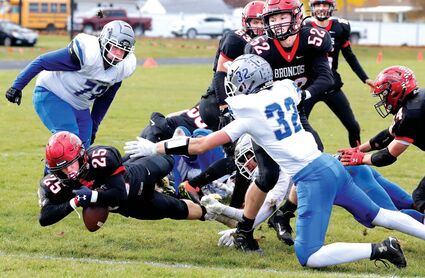 Brody Boness dives over the goal line for the Broncos' first touchdown on Saturday against Manson.

RITZVILLE – The Broncos boys football team is headed to the state Class 2B playoffs.

But the Trojans were no match for the Broncos in the District 6/ 7 crossover play-in game, which would send one team to the playoffs and end the season for the other.

"This is the first loser-out game most of these kids have eve...