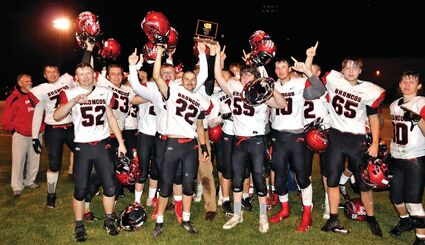 The Broncos football team celebrates its undefeated season on the field at Colfax on Thursday night. See story on page 9.

RITZVILLE – There is some irony to the makeup of the Lind-Ritzville/Sprague/Washtucna football coaching staff this year, irony which has some long-time local fans thinking back and looking ahead.

It was 2004 when the Lind-Ritzville Broncos, then an athletic combine, went unbeaten and won the state football championship in a late-game comeback, beating the DeSales (Walla Walla) Irish, 25-21.

There have been unbeaten teams since, along with back-to-back state championships over Morton-White Pass in 2012 and 2013.

But some Broncos football fans recall the magic of the 2004 championship.